View cart “The Way a Woman Knows” has been added to your cart.

The Kingdom of Birds

The Kingdom of Birds

Joan Colby, a masterful poet and avid bird lover, takes us on a lyrical exploration inside the bird kingdom. Through her careful observances and vivid imagination, we often see ourselves—our human interactions, our social conditions, our philosophies, our celebrations, our grief. And sometimes, of course, a poem is simply about the bird.

There’s always one
Who is preoccupied—a dreamer
Contemplating the poetry of a cornfield,
Gleaning the easy pickings of
The left behind. 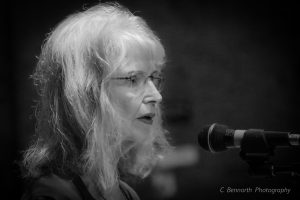 She has published 22 books including Selected Poems (FutureCycle Press) which received the 2013 FutureCycle Book Prize and Ribcage from Glass Lyre Press which has been awarded the 2015 Kithara Book Prize. Three of her poems have been featured on Verse Daily and another is among the winners of the 2016 Atlanta Review International Poetry Contest. Her poems are included in numerous anthologies, the latest being Poets to Come which was published in accordance with the Walt Whitman Bicentennial Convention, May 31-June 2, 2019. Her newest books are Her Heartsongs from Presa Press (2017), Joyriding to Nightfall (2019) from FutureCycle Press, Elements (2019) Presa Press and Bony Old Folks (2019) Cyberwit Press. Colby is a senior editor of FutureCycle Press and an associate editor of Good Works Review.

Early Praise for The Kingdom of Birds:

Written by a poet at the top of her conjoined powers of observation, understanding, imagination, and craftsmanship, these poems are as clear-eyed and precise as a hawk in descent, and often as fierce. Like Audubon in her poem “The Artists of Exactitude” (though unlike him because her subjects are not dead), Colby is an Obermeister[ ] of observation/ Threading the needle of particulars. These poems capture how the experience of watching birds impinges on our minds and stirs our emotions. The hinges of [crows’] wings seem to groan/ Like the rheumatic branches. Even my eyes/ Ache with the freight/ Of their passing. Gulls who ride the swells are Snugged to our planet/ like fleas/ In a heaving vastness. All night the owl is silent as a ghost/ On glider wings. A seized bird is lifted skyward/ into the rapture of a redtail’s/ Book of revelations. A Cooper’s Hawk stoops from clouds,/ A lightning bolt thrown by a fierce/ Old god. Colby’s metaphors, exact and original, continually delight.

I wake to wings crashing into my window, Joan Colby informs us in this congregation of bird poems, as casually as if we’d just sat down with her morning coffee and toast. There is, however, nothing casual about her poetry, nor is the subject birds alone. Colby knows and employs the language of ornithology to riveting effect, but always with a human implication circling and circling. We’re not supposed to anthropomorphize, Colby admits, but the more we learn, the more we ponder. And doesn’t the power of strong poetry lie in its ability to make us ponder? In these poems, see how Colby selects the delectable morsel, knowing exactly what [we] want. Try just one poem. You’ll follow like a soar of larks.

Ever a sharp observer of people Joan Colby has an eye and much affection for nature as well. In these poems her viewing of birds reflects back to the human world with the attention for detail that has long given her poetry a vigorous edge. She never shirks from harsh facts, though she can still leave us with the observation that we roost in each other.

The Kingdom of the Birds

The feathered god observes how clouds
Pass over in a grand parade
Of custom. A goldfinch flourishes
Its humoresque and now the day breaks
Staccato with the songs of birds in spring.

Believe in nothing or in this
Bluejay deity in a headdress
Of animosity and greed. We’re
Just like this, grabbing and getting.

And then a squawk, a rush of wings.
Birds’ claws clench on branch or wire.
Our hands are made for grasping.
The sky exists for no one’s pleasure
Confounded with the adjectives
We insist must endure
As long as language.

Be the first to review “The Kingdom of Birds” Cancel reply