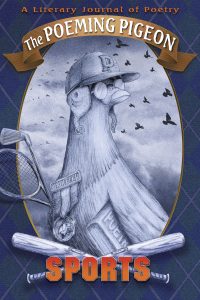 “A” by Scott M. Bade, published inThe Poeming Pigeon: Sports, released in May 2019 by The Poetry Box, has  been nominated for The Pushcart Prize.

There were moments when the entire cheerleading team assembled themselves into a giant human letter. They built the foundation of the strongest girls, and then successively built upon them the pyramid that formed the letter A. For St. Alexander’s Knights, the Catholic grammar school. Mostly, I believed then, as nearly all kids do, that our bodies represented and contained the undeniable force of life and an invincibility in the face of nearly everything. I knew danger, for sure, existed outside of the prescribed structures called home, school & church and I believed that what existed behind letters was black and white, heaven and hell, win and loss. But the big A of ourselves, the highest, the first, was a fulcrum of language none us knew the real power of. We were kids. I knew there was something utterly fascinating in the dark that was white and that seemed to stretch forever when I’d close my eyes and skim the parched plain of it, sheet-like but endless. I’d imagine everything gone, all of us, the planet, the universe, until my body would swell with an emptiness so deep, I’d shiver. And then I’d pinch my nose between thumb and forefinger and gently twist, as if changing the TV channel and the dream would alter. When I imagine that I can see those girls stacked now, just as they were back in 6th grade, into that forced signifying act of support for the group of boys they’d known for nearly half of their lives, it only now occurs to me that those moments decked in uniforms and a blind sense of team did in fact show us all something fundamental and perhaps profound about the web we’re all part of: Not the all for one and one for all blanket—even if there is a thread of truth in that. No. What I see is how language makes us and not we it. And I cannot deny that I see another thing in the big body of A, just out of bounds at the south end of the court. I see what we have created and I see that it came down, that even as it was ours, it wasn’t anything but us, and therefore, it was both beginning and end, sign and signifier and, like the red-bulb numbers on the electronic scoreboard—31-9, St. A’s won; I sank two shots from the right corner of the free-throw line, I can still hear the roar!—what exists here exists nowhere else and only for us. And right here that big human A is an exhibit, sealed in the transparency of this evidentiary tome, marked in black cryptic markings. And those bodies and the figure they made, are they still being made right here, and will they forever etch themselves out of the haze of my memory? Will they be as much as they will not be, always and already until there is no be left to be? Can you see them righting their bodies writing their languages? Perhaps all any of us can do is remark upon the execution. Admire the presentation. Write about what’s left. My, the red and white uniforms still appear so bright after all of these years. I wonder how they preserved the colors.