Here, Doug Stone, a fourth generation Oregonian, shares his love of Oregon—its places, its seasons, and its people. Through his lyrical and narrative poems, we are led to witness the power of place, the bonds of family, and his tributes to favorite artist and poets—all through the lens of the ubiquitous northwest rain. 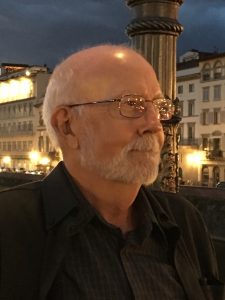 Doug Stone is a fourth generation Oregonian and lives with his wife amid hop yards and vineyards near the Willamette River in Benton County, Oregon.  In past lives he has worked on a county road crew, been a grocery store clerk, a case worker, and an analyst and a consultant on public policy issues to state governments, AARP, and the Civil Rights Division of the US Department of Justice.

He has won the Oregon Poetry Association’s Poet Choice Award.  His poems have been published in numerous journals and in the anthology, A Ritual to Read Together: Poems in Conversation with William Stafford.  He has written two collections of poetry, The Season of Distress and Clarity, and The Moon’s Soul Shimmering on the Water.

Early Praise for Sitting in Powell’s…:

“Here the rain tells the truth about everything it touches.” Combine elegiac Oregon rain with the spareness of Tang dynasty poets, and you get the honest lyricism of Doug Stone where the joy of swallows can write in the sky that “poetry may not save the world/ but reminds me/ the world is worth saving.” And please don’t miss the magnificent tribute to artist Rick Bartow.

—Penelope Scambly Schott, author
A Is for Anne: Mistress Hutchinson Disturbs the Commonwealth
(Oregon Book Award) and Lovesong for Dufur

Doug Stone’s collection of poems, Sitting in Powell’s Watching Burnside Dissolve in Rain, is an anthem to Oregon where the author has lived a long and intensely observant life. In addition to immersing the reader in a celebration of nature, Stone also mourns the human interventions such as dams which have lobotomized those ancient voices—the sound of Celilo Falls. He grabs the reader by the collar with “The Wilson River Road”—a nasty stretch of asphalt,/ especially at night, shouldering through the mountains/ like a mean drunk staggering toward the coast. Frequently, his landscape or aspects of the weather take on an unexpected agency: the January sun troubles down/ the left margin of the sky like a misspelled word,/ neither warm nor bright, just wrong (“The Power of Place”). Or, from “Summer Heat on the High Desert:” All day the great animal of heat paces back and forth . . . his sides rise and fall with the twitching breeze . . . And sometimes it is an animal, in another place,/ more dog than he’s been in weeks,/ so complete in his rancid aura,/ oblivious to any human . . . (“Dog Days”). Stone does not flinch from melancholy but also makes room for humor—see “To the Barista at Starbucks Who Told Me Carmel Macchiato Isn’t the Heroine in Two Gentlemen of Verona.” Finally, Stone honors the Masters: Ursula K Le Guin, Rick Bartow, Peter Sears, and through ekphrasis, George Rouault and Marc Chagall, Jan Pienkowski and Leonardo Da Vinci, and, perhaps closest to his heart, an epistolary homage to Du Fu and Li Bai.

There is pain and there is splendor in these poems, and Doug Stone knows that the task of the poet to study and transform their meeting places. In Sitting in Powell’s Watching Burnside Dissolve in Rain, he has succeeded admirably. Here is a poet who writes in spare, direct language to set real life in motion.