Penelope’s goldendoodle, Sophia is quite the free spirit—so much so that she reminds the poet of Walt Whitman. In this jeu d’esprit, consisting of 30 poems, we enjoy a delightful peek inside the mind of a dog through her often entertaining & insightful “conversations” and adopted philosophies of her favorite poet (after her poet-owner, of course).

Enjoy a video of Penelope reading from the book: 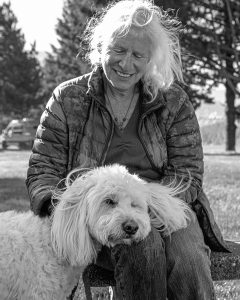 Penelope Scambly Schott is a past recipient of the Oregon Book Award for Poetry and author of a novel and several books of poetry, including her 2018 prizewinning chapbook November Quilt and most recently On Dufur Hill about a small wheat-growing town in central Oregon.

In Sophia and Mister Walter Whitman, Penelope Scambly Schott’s goldendoodle narrates from a dog’s point of view. Sophia loves reading and quoting Walt Whitman. Phrases from Leaves of Grass are seamlessly woven into every poem. In “Endless Afternoon” Sophia waits for her person to return home. “The clock indicates the moment —/ but what does eternity indicate? I’ll be old by the time they eat dinner./ I’ll be older by the time I get to lick their plates.” Four out of four paws for this extremely entertaining collection.

—Mark Thalman, author of The Peasant Dance and Stronger Than the Current

Penelope Scambly Schott’s playful poetry collection, Sophia and Mister Walter Whitman, is a delight, especially for admirers of both our companionable canine citizens and Whitman’s poetry. Poems expressed in the voice of Schott’s goldendoodle, Sophia, draw us into the illusion that somehow Sophia is not only well-versed in Whitman, but she has also adapted many of his views to her own world. Sophia’s dog world is one of joy but, perhaps unlike Whitman, she occasionally experiences guilt or self-doubt, as when she suspects there was once another beloved dog before her time, or when she gives in to her worst instincts by attacking a neighbor’s chickens. In the search for her better self, Sophia adapts some of Whitman’s lines and views. One of the pleasures of these poems is recognizing the actual words of Whitman re-purposed here to Sophia’s doggy world view.

—Barbara Drake, author of The Road to Lilac Hill

What a delightful escape into a pup’s mind! Ms. Schott captures the worries, aspirations, and joys of a dog. Sophia quotes and Schott incorporates Whitman’s advice: “Whatever satisfies the soul/ is truth and there’s no truth like cheese” and “The thing about dogs is/ they do not lie awaken the dark/ and weep for their sins.” We are reminded that even on bad days we “exist as [we are], that is enough.” I could write more but I’ll let the rest be a pleasant surprise to the reader!

Some Thoughts While Hanging Out

I’ve spent a lot of time with Mr. Whitman,
Or as I call him, Mister Walt.
Mostly we hang out in leaves or grass.
And mostly he gives good advice.
He says this is what we should do:
Love the earth and the sun and the animals,
have patience and indulgence toward the people.
The earth and the sun are pretty doggone good
and it’s certainly right to love animals—
making a small exception for chickens and cats.
But where he’s really on target is about people.
Patience and indulgence, my feet.
For creatures who can turn lights on and off
and drive cars, people can be pretty dumb.
My own people, for example.
Sure, I love them,
but it’s ridiculous how hard they work.
The only thing they do with leaves is rake ‘em.
The only thing they do with grass is mow it.
They don’t even know
how sweet the grass can taste.