Surreal Expulsion’s title poem responds not only bluntly to the 2018 mass shooting that left seventeen dead at Marjory Stoneman Douglas High School but ultimately to the socio-political negligence and indifference behind violence and injustice worldwide. In assorted other blasts D. R. James confronts contemporary issues and personal skirmishes against “sapient insufficiency” through free verse and hijacked forms (prose poem, cento, sonnet, villanelle), arresting images and twisted wit, exposé and surreality. In toto, the collection wrestles, now soberly, now sardonically, with strains of “barbarity, barrels of it” as well as of “the calm shadowy fraud.” 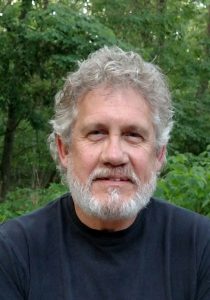 James has been teaching writing, literature, and peace-making at a small college for 34 years and lives in the woods outside of Saugatuck, Michigan, with his wife, psychotherapist Suzy Doyle. Between them they have six grown children, four grandchildren, and two cats.

D.R. James’s Surreal Expulsion does not close itself to the events of our historical moment, but invites them into the “fortress of language” to work their “eccentric twisting in the inexplicable path.” In such a short collection lies a range of forms—prose poems, a villanelle, a cento, a sonnet, as well as free verse—that push language to fathom this twenty-first-century life of ours: deep political divisions in the national “family,” near-routine mass shootings in schools, consumerist imagination bleeding into a literary one that we only thought was impervious. With textured lines and crackling diction, these poems register our nervous collective pulse.

The poems in Surreal Expulsion are both topical and wise as they address the human condition, and they deftly walk the line between gravitas and levity. Some of that levity comes from the very apparent love D.R. James has for the sound of language and the potential for word play that arises from the making of meaning. As intellectual exercises, these poems wake the mind and ask us to consider our place among the masses; as verbal amuse-bouches, they feel good in the mouth and ask to be savored.

~ Sonia Greenfield, editor of Rise Up Review (online) and
author of American Parable and Boy with a Halo at the Farmer’s Market

Surreal Expulsion is aptly titled. Many of these poems serve as chimeric rejections of the past or the fearful future, the foregone, the despicable, the uncertain. Read them and you’ll discover harsh metaphors of childhood, of a “small-bodied boy” who terrorizes a puppy, another with “naked legs like sprung sausage curls,” “the perfect girl straining to witness her big brother’s totemic ecstasy.” You’ll envision dreams, or perhaps nightmares, of the natural world—a “remote ocean boiling away its underwater flora and fauna” —and its institutions— a “bellied, brimstoning minister” in whose churchyard a “lacy little girl in shiny shoes / comes fluttering among the unsung mothers and, / still young, postpones payment of her fated dues.”

But the poems of resistance pluck an activist’s strings most intimately. They compose a requiem for a nation we thought we knew, rich with horror— “a certain absurdity … blurting like boils,” “War that mushrooms undiminished” —and scant of hope— “optimism will seem a stretch.” Read them and you’ll find not a eulogy, no celebration of remembered heroes, but a sorrowful, wrenching threnody. Cry out, if you must, rend your clothes, gnash your teeth to stubs, lament like a Scotch-Irish ballad, but they will have you know: these abominations are ours, “in a language we now must teach across America.” They are a call to action. How will you respond?

Be the first to review “Surreal Expulsion” Cancel reply