To celebrate National Poetry Month, The Poetry Box is sharing a Poem-of-the-Day, selected from various anthologies and individual poet collections that we have published over the years. 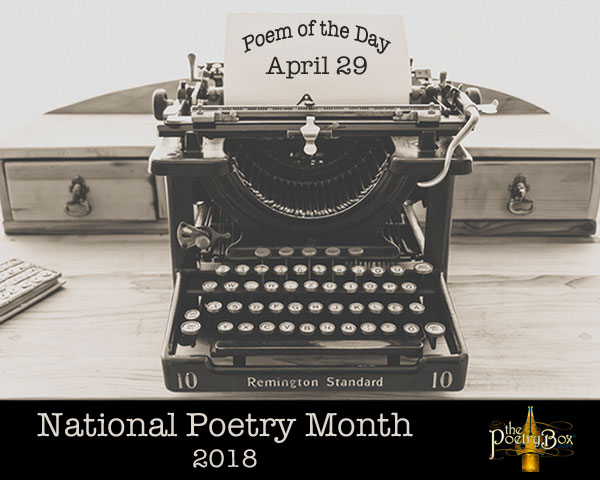 Please enjoy today’s selection: “Forms of Grief” by Diane Averill, which appears in The Poeming Pigeon: Poems from the Garden:

This rock wall contains no mortar.
At the bottom, a long, sedimentary
slab, darkened with soil and moss.
It was lively with tears when I first
laid it there for Lyle, who took his
own life in a little room on Castro Street
at the beginning of the AIDS epidemic.
His closest friend, he told
his young daughter to call me fi rst.
Next, a row of sculpted stones to represent
the dogs who were my wordless companions.
Some are broken by the weight
of that above.
A large piece of petrified driftwood
for my memory of the boy
who died building a sand cave.
I remember when he and his
brother jumped on seaweed, popping it
and try not to think of lungs under
that weight of sand and his family’s
terrible grief. I wedge two whole
sand dollars between the driftwood,
and the magazine above it,
which is wrapped against the weather for my buddy, Joel,
the editor who died in Mexico. Broken
Mexican pottery instead of rocks for him.
He knew Spanish and his young lover’s kiss: two tongues.

Into the hardened ash from Mt. Saint Helen’s
eruption, I carve the words
mentor and ash for a poet-teacher I loved.
Little purple sedum brightens
in spring between some of the cracks
for the cousin who died young
of a birth defect. Laura could laugh,
love, and was loved, but was never
able to sit up or grow past the age of two.
Her name goes on in my daughter.
The heaviest rock of all I call Father,
who lived only to his late sixties
before suddenly collapsing
of a brain aneurism. A glass purple heart
goes next to his, one he received for
flying his glider onto French soil during the
Normandy invasion. The wounds he
would never talk about were shrapnel
in all of our lives. My little sister and I
slept in the same bed the night after he died.
Two small candy stripe flowers grow there.
Now I am past the age when my father died,
and I see signs of coming death in myself
and in those around me. In certain lights, those
in their late eighties turn into grey dust motes.
Aging is brutal, says Claire. One of my soul-sisters,
Pam, died of cancer. Too soon! Molly and I cried.
We were three, so I plant a trillium for us.
Wild sage I found slides into her river rock,
for her Portuguese hair,
green glass all around for her love of nature.

My arms are shaky, almost too old to place
my mother’s igneous rock on top.
She was a drama who loved the sea. A conch goes by her,
before a sudden force I didn’t know I had
pushes the whole wall over. Now I have a rock garden,
all the memories tangled together, whispering
among themselves. I mix ash into the soil so everything
grows well. Now there is room for poppies, spreading
vine-like flowers, foxglove, lupine, iris, tulips.

I throw delirious wildflower seeds everywhere
for new births. The ubiquitous they say I am losing
my memories, but I have so much more of them
than they could ever imagine.