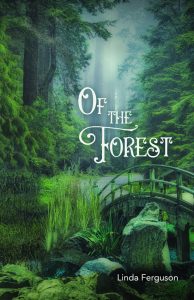 A story of three siblings, a spouse and a surname, Of the Forest is threaded with poems that hint of danger while also celebrating love…and the sumptuous pleasures of language itself.

The collection reimagines childhood as a journey through a forest where two brothers are, respectively, a wolf and a bear, and their younger sister (their sometimes prey), is someone who society wants to be a “pink balloon,/ a party decoration.” By living in a “womb of imagination,” she transforms herself into a fox whose “topaz eyes glow through fronds/of metaphor and ink.”

When the fox leaves the forest of childhood she revels in her new terrain. Now, with “words unsheathed,” she wonders if she’ll ever “howl in the presence of bears and wolves,” while she still dreams of a world where all creatures can astonish themselves “with unimagined flowering.”

Along the way, the poems ask where does memory end and imagination begin, what power does a name hold over us, and how can we use language to find understanding, humor and grace.

From DeForest, her family name, Linda Ferguson provides the ground on which she weaves magic from the ordinary into the extraordinary: her birth where she is already a child of the forest, unfurling, two brothers of different dispositions, one a wolf, the other a bear cub, the love of her husband who made the outside world bloom, and creation of their two children spun from the straw of our genes.

Demonstrating her mastery of metaphor, a cinnamon tree stump becomes a small bear becomes a brother she calls Hansel, the other, more troublesome brother, Johann, becomes a blue-eyed wolf—slinking bones and a cold, faded coat, while she emerges as a fox with topaz eyes [that] glow through fronds of metaphor and ink.

Though she tells us this is a simple suburban story, every poem in this collection is a jewel, obscured by a diaphanous curtain of imagination, beckoning us to look behind. Her word play imagines her name “to be the petal of a red, red rose” or to remain nameless “ready to plunge … into new wet worlds. The chapbook is a delight to read; one can almost hear the forest sing.