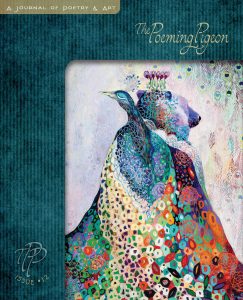 “Have You Ever Had Kugel?” by Marilyn Johnston, published in The Poeming Pigeon: A Journal of Poetry & Art (#12), released in October 2022, has  been nominated for The Pushcart Prize.

Have You Ever Had Kugel?

You’ve never had kugel—not until you’ve eaten it
in an alley café in the Jewish Quarter in Krakow
in a shy November light, around the corner
from where your grandparents once lived,
now a vacant lot.

You’ve never had kugel—the noodles cooked
tender and moist, layered with fresh-made
cottage cheese mixed with cinnamon,
plump-dried raisins, a dollop of sour cream,
and served on a blue-patterned plate
with a cloth napkin—not until it’s served to you
by a Yiddish-speaking woman in an apron,
as she runs to greet you from the kitchen
as if you’d just arrived for Shabbos dinner.

Kugel doesn’t taste the same unless one hand
is holding it while looking out the side window—
a shot fired, dogs approaching in the distance.
Not unless there are holes bored in the walls
of your mother’s Museum of Shattered Memories
in the attic trunk, and each time you try to peek inside
she cries, so you’re careful to leave the lock tight.

Kugel satisfies, unless you choke it down, like fear—
scanning the exits as you learn Cousin Viola must
have done, as she opened the vial and wondered
if the poison would be painful.

No, you’ve never had kugel—
not in your ceiling-fanned, poetry writing,
post-graduation trip to see where your family perished.
Not until you finally arrive at Auschwitz and you walk
under that gate, inscribed “Work Sets You Free,”
and the crematoriums appear where the tracks end,
where the stricken faces from every photo you’ve ever seen
from the Camps lie like ghosts on the beds’ rusty frames.
Not until you have to run outside, gasping for air.

Not until you finally get it that their kugel
was carved from sweat and cold winds,
seasoned with a mixture of dread and faith,
then steamed in the world’s blind eye.

And I ask you, again—
have you ever had kugel?