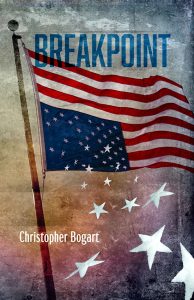 Breakpoint is a collection of poems that speaks to a nation in crisis. Its poetry is commentary on a country that was built on the promise of the American Dream, and yet is now led by a president who, in 2015, declared that “The American Dream is dead!”

It explores the nightmares of Trump’s America: the rise of white supremacy, the separation of 5,400 migrant children from their families, the resurgence of virulent racism and the rise in hate crimes against Muslims, Jews, and people of color. These poems explore the promise our forefathers made of an American Dream – a dream enshrined in the words of the Declaration of Independence, on the base of the Statue of Liberty and in the hearts of immigrants who have come to America in search of that Dream.

This is a call to action, to protest, to participate and to break the silence of indifference—a silence we can no longer afford if we want the promises of America’s past to be fulfilled in the present, and to guarantee American’s future.