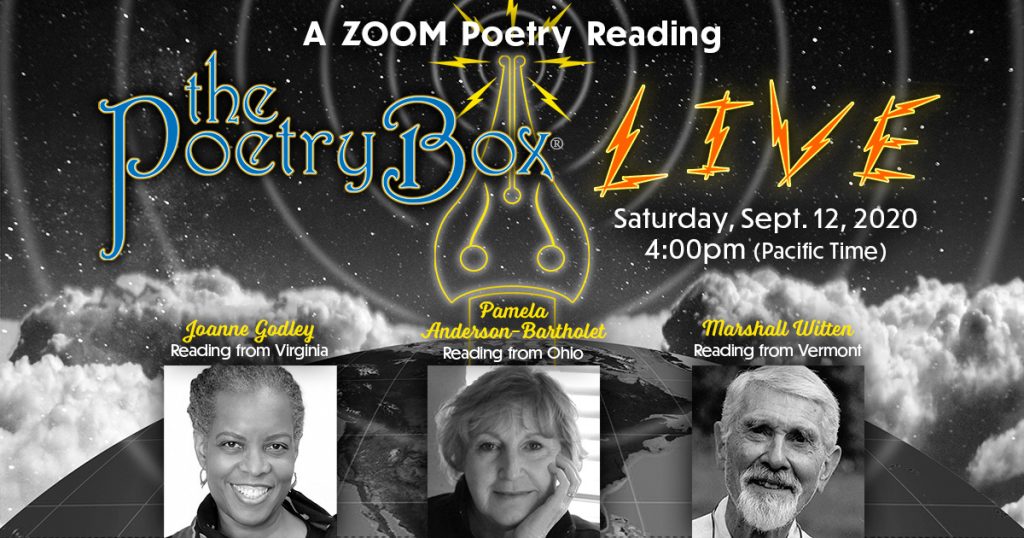 Enjoy the video from September’s show: 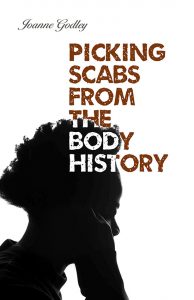 Joanne Godley, author of Picking Scabs from the Body History (The Poetry Box, 2020) is a practicing physician, poet and writer whose work is informed by social injustices. She is a native of Detroit residing in Alexandria, Virginia. She is convinced she is a descendant of nomads because traveling is one of her great passions (along with art collecting, salsa dancing and cycling). She spent time working in Africa as a Peace Corps medical officer. Godley’s lyric memoir was a finalist for the Kore Press Memoir contest and the Sunshots Press Prose Contest, and it received honorable mentions in the National Woman’s Book Association Contest. She completed an online novel writing certification program through Stanford University. Her first novel was ranked finalist in Kimbilio’s annual novel writing contest. She is a member of the Women’s Fiction Writing Association, the Author’s Guild and the NWBA. 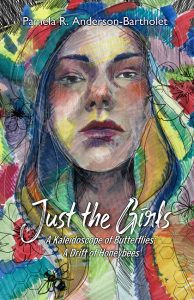 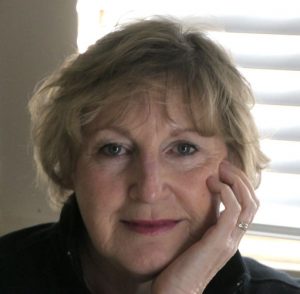 Pamela Anderson-Bartholet, author of Just the Girls (The Poetry Box, 2020) is a poet, lover of blues music, traveler, hiker, and yoga practitioner who grew up in Warren, Ohio, in an area once known as The Steel Valley. Much of her writing focuses on the Holocaust, reflecting stories her father recounted from his service as a paratrooper in the 82nd Airborne during WWII. Her Holocaust poem “My Brother’s Coat” won the Association of Writers and Writing Programs Intro Journals Project Award. Her poetry also has appeared in Whurk, Mason’s Road, Atticus Review, Sky Island Journal, and elsewhere. She holds an MA in English Literature from Kent State University and an MFA from the Northeast Ohio Master of Fine Arts Program (NEOMFA), which awarded her a Bisbee (Arizona) Travel and Study Fellowship. She has been a ghostwriter, grants writer, and fundraiser for public radio. When she is not traveling with her husband to far-flung places to snap pictures of windows, doors, and lightbulbs, you can find her in Northeast Ohio; Virginia’s Shenandoah Valley; or Charlotte, North Carolina. 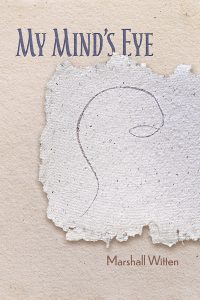 Marshall Witten is author of My Mind’s Eye (The Poetry Box, 2020). Having practiced law for more than 50 years, has turned on his retirement to writing poetry. The natural world inspires many of his poems, as do politics, philosophy, travel, human relationships, aging, and death. His poems have appeared in The Mountain Troubadour, published by the Poetry Society of Vermont. One of his poems was awarded honorable mention in the 2016 W.B. Yeats Society of NY international competition. In 2016 he published a chapbook, Meditations on Change. As an elected public servant, Marshall served as Bennington County State’s Attorney, and later in the Vermont House of Representatives chaired the Vermont House Appropriations Committee. He was a founding director and later served as chair of the Vermont Community Foundation. He now lives with his wife, a professional artist who has illustrated his three books. They live at the end of a road in rural Vermont, take long walks with their dog; he shovels snow when necessary, and writes because it’s always necessary.

Enjoy a video of the show: