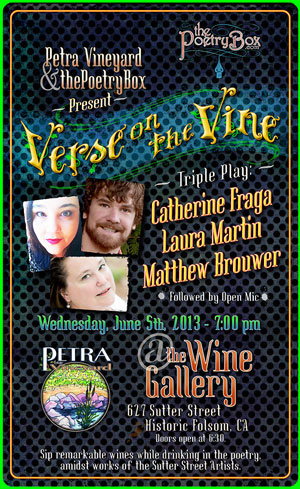 Verse on the Vine Poetry Series

What do you get when you combine Zombie Haiku, Gary The Mattress Salesman & The Gospel According to Men with Canes? One hell of a show for June, that’s what!

Laura Martin is a freelance writer/photographer whose features, essays, poetry and images have appeared in multiple publications. She was the grand prize recipient of the Second Annual Pat Schneider Poetry Contest in 2012 and was recently nominated for a Pushcart Prize for poetry. As an Amherst Writers and Artists affiliate, Laura leads private writing workshops in the Sacramento area.

Catherine Fraga teaches writing at Sacramento State University. Her poems have been widely published in numerous journals and anthologies. She has been nominated for a Pushcart Prize and has been the recipient of several poetry awards. Her book, Running away with Gary, the Mattress Salesman, is published by Poet’s Corner Press.

Matthew Brouwer is the touring author of The Gospel According to Matthew and Men Who Walk with Canes. Matthew’s work bridges the worlds of spoken word and literary poetry to create a style that can be both evocative and subtle, enlivening and profound. He has performed in cities throughout the west. He teaches creative writing in Bellingham, WA public schools and facilitates a writing circle for people suffering chronic medical conditions.