Only 3 left in stock

Mary Florio is interested in the concept of transmission, of how so many things—virus, hate, despair, fear—all the willful seeds of undoing—follow us poor humans around in a cloud of unknowing. The pandemic has taught the world loneliness, but we have always been lonely, and wounded. We just can’t see it. We’re in the fog, always.

Enjoy a video of Mary reading from the book: 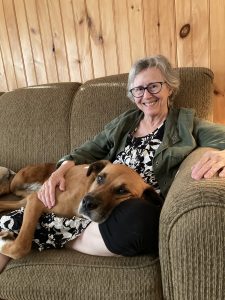 Mary C. Florio has been writing poetry for over 20 years. Early successes include second place in the Allen Ginsberg Poetry Competition. In 2017, she was featured in Nasty Woman Poets: An Unapologetic Anthology of Subversive Verse. She has collaborated on two books with award-winning book artist Miriam Schaer: Cinderella, Ever After and The Posture Queen, and most recently was a finalist in the 2019 Palm Beach Poetry Festival’s ekphrastic poetry contest.

Early Praise for The Fog:

Mary Florio’s book is more than aptly titled The Fog. These poems seem shrouded in mist, the meaning always elusive, as though we are forced to drive through veils to find the meaning through this surreal landscape. What an exquisite and beautiful book!

In Mary Florio’s remarkable debut, lushly musical poems of striking imagination and wit chronicle a world reduced by the Covid pandemic to one in which “All the party lights are out,” and creatures both human and animal approach being undone by isolation, loneliness and peril. But though grounded in an altered, wounded planet that “can’t stop/ whining about its pain as if pain were/ something new,” Florio’s tart, provocative, and gorgeously visual poems chronicle what no pandemic can distract us from—the fundamental necessity to connect, to understand, to love—or, at least, to arrive at what Robert Frost called “a momentary stay against confusion.” Mary Florio’s The Fog is a triumph, capturing truths so clear and elemental we might, in our justifiable fear, have failed to recognize them.

It’s early, and the fog is still in fugue.
I feel like I want to tear it with my teeth,
teethe on it as I did on grandmother’s
gold cuff. I have finally begun to self-
isolate with impunity. No touch
is the new touch, elbow bearing the weight
of pandemic, of his-story and mine.
All the party lights are out, galaxies
in a worried sci-fi novel. I’m worried,
and I need wine for this. The world can’t stop
whining about its pain as if pain were
something new. As if god. As if caring
enough to reach over to someone’s brow
to feel for a fever that is surely
there. And that water, that water turning
into air? It makes me lost, it finds me
lost at last.

Be the first to review “The Fog” Cancel reply