Based on true events, Shoebox is an epistolary, poetic narrative, blending actuality with fiction, about Juliana who was adopted from Russia as an infant and who now struggles with depression, has abandonment issues, and deals with her physical hip dysplasia as well as her “familial dysplasia.” When she stumbles on a shoebox in her sister’s closet that is filled with documents concerning her adoption and letters from her family, she reminisces about the past and dreams of the future. She begins to write letters to her sister, adding to the collection of documents hidden away in the shoebox and the shoebox of her belly. 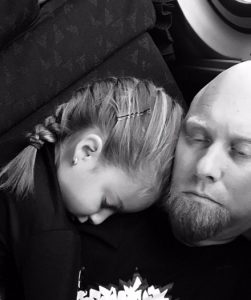 Donovan Hufnagle learned late in life that his great, great aunt was proposed to by Conrad Hilton. Unfortunately, she declined because she didn’t want children. So instead of making questionable videos as if he were Paris Hilton, Donovan Hufnagle writes; it’s better that way.

Donovan is a father of three, a husband, and a professor of English and Humanities. He moved from Southern California to Prescott, Arizona to Fort Worth, Texas. His book, The Sunshine Special, published in 2018, is “part personal narrative, epic poem, and historical artifact.”  Other recent writings have appeared in Beyond Words, Wingless Dreamer, Subprimal Poetry Art, Americana Popular Culture Magazine, Shufpoetry, Kitty Litter Press, Carbon Culture, Amarillo Bay, Borderlands, Tattoo Highway, The New York Quarterly, Rougarou, and others.

“Rifle through this Shoebox to discover the grim realities layered between a family’s grand hopes. Told in documents that connect two lines and two countries, Hufnagle drops epistolary clues that guide readers to reconstruct the story of Juliana, a Russian adoptee. Vivid voices, braided motifs, and emotional depths await those who eavesdrop upon these intersecting lives. An absorbing read that juxtaposes past and present, love and lack, in language that startles.”

—Rebecca Balcarcel, author of The Other Half of Happy

Be the first to review “Shoebox” Cancel reply