Everything the poet sees
or hears, thinks, feels or imagines
gets captured, interpreted and shoe-horned
into a damn poem
whether they like it or not. 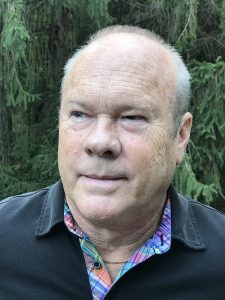 Educated first in the sciences, graduating into comparative literature and languages, Michael Estabrook is a recently retired baby boomer child-of-the-sixties poet freed finally after working 40 years for “The Man” and sometimes “The Woman.” No more useless meetings under florescent lights in stuffy stale windowless rooms.

Instead, he is able to concentrate on making better poems and on pursuing other interests including: art, music, theatre, opera, history, genealogy, philosophy, and his wife, who has always been the most beautiful woman he has ever known.

Hopefully with each passing decade the poems have become more universal in nature: clear and concise, succinct and precise, more thought-provoking and relatable.

Michael Estabrook’s The Poet’s Curse is a must-read collection by a particularly perceptive observer of our often-cockeyed world. Each of his poems repeats and enlarges upon the flavor of his brief jewel “because of the encumbrance of material things”: rusting stove at curbside being/thrown away by the inhabitants/of an old dilapidated shack/in back and I think that all/of us should remember/to throw-out our old stoves. Read Estabrook’s The Poet’s Curse knowing you’re reading real poetry.

What’s become increasingly clear to anyone paying careful attention over these past few decades is that Estabrook is a master jeweler and that each day, each moment, of his life is a small, glittering stone waiting to be shaped into something iridescent and precious. These poems are the minutiae of a life well lived and well loved – each one is a gem that shines with a vital, stunning clarity.

I have been reading Michael Estabrook for the full twenty years that I’ve been engaged with the small press, and never tire of his humorous, often self-deprecating, yet poignant poetry. This full-length book is long overdue, and is a just reward for a consistently wonderful poet.

Be the first to review “The Poet’s Curse” Cancel reply