Only 2 left in stock

In Small Blue Harbor, Ahrend Torrey exalts the ordinary, everydayness of life spinning his keen observation into lyrical poems and proems. This collection celebrates our human connection with nature, influenced by a New Orleans backdrop, and gives us a glimpse of the struggles of being gay while raised in the Deep South. Torrey’s authentic, inspirational voice will have you returning to these poems again and again, finding refuge from a world that is not always kind. 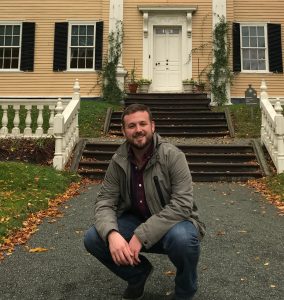 Ahrend Torrey, a poet and painter, attended college in Wilkes-Barre, Pennsylvania, earning both his MA and MFA in creative writing from Wilkes University. He is the 2014 recipient of the Etruscan Prize awarded by Etruscan Press, and many of his poems have appeared in numerous journals online and in print.

When he is not writing, he enjoys the simpler things in life, like walking around City Park with his partner, Jonathan, and their two rat terriers Dichter and Dova. He makes his home in New Orleans, and is currently working on a new collection of poems titled Bird City.

In Ahrend Torrey’s reverent praiseworthy debut, the universe is in the details. Here, a man finds another side of himself near a flock of ducks, in the dream of a tree, as the world turns to light and faces decay. Nothing is left unexamined, nothing shunned. In every observation, the poet seems to ask: why waste time on fear of each other or any living thing? All is sacred: moths, pups, elderberries, even the corners of a violent city can be reborn. Transformation is a gift in this collection reminding us to shun the world’s quickening grind. Shouldn’t we pause for beauty? Shouldn’t we note the unseen everything trailing in our wake? Love is being carried—remembered and held in a soft space—by another. And isn’t this what “all of us gathered, in this small blue harbor” long to be?

~ Remica Bingham-Risher, author of Starlight & Error and What We Ask of Flesh

Like a scientist at the microscope, Torrey invites us to discover worlds inside the smallest moments. Stay a while, he says, and we are better for having lingered.

~ Barbara Taylor, author of All Waiting is Long and Sing in the Morning, Cry at Night

As its title suggest, Small Blue Harbor calls readers to see the power of the everyday beauty around them. Emphasizing intersections between the natural and the built worlds, Ahrend Torrey focuses on their impact on one another. With a voice that is sometimes worshipful, reverent even, and sometimes poignant, Torrey urges readers to look at the world anew and appreciate the power of the ordinary moments of life.

~ Lorie Watkins, editor of  A Literary History of Mississippi

Small Blue Harbor is large and kaleidoscopic as an ocean. Ahrend Torrey’s generous voice quests through the small things of this world to engage everything: the miracle of meals, the cabling together of the simple and difficulty, the way that daily life with its small pleasures confronts the prospect of attacks against the transgendered and legislation that could kill millions. These are poems of delicate inclusion and fierce insight.

Small Blue Harbor demonstrates Torrey’s skill of combining classical and contemporary poetic styles to create a voice of wonder and astonishment that is uniquely his. Torrey’s poems and proems invite the reader on a walk with the poet through the Louisiana bayou and New Orleans to witness the ordinary… and see just how extraordinary it truly is.

Be the first to review “Small Blue Harbor” Cancel reply