Only 2 left in stock

In The Very Rich Hours, Gregory Loselle recounts experiences, in childhood and later, in and around his grandparents’ house on Grosse Ile, Michigan, an island in the Detroit River near the mouth of Lake Erie.

Loselle’s mastery of various poetic forms parallels the way in which memory is a formal reconstruction of events. Throughout the collection, readers will enjoy triolets and rondeaux, as well as a ballade, sonnet, ghazal, villanelle, sestina and even an Anglo-Saxon caesura, all beautifully executed to bring these cherished stories to life.

Take a walk down memory lane and open the door to a houseful of stories, from watching Grandpa shave to sifting through a crateful of old photographs that “call us to forgotten places” and remind us “what we were and meant to do” in the very rich hours of our lives. 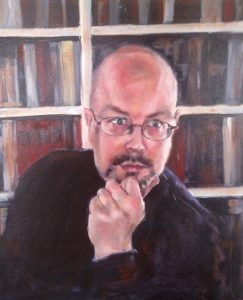 Gregory Loselle published his first work, a play, at the age of eighteen, and subsequently won four Hopwood Awards and the Academy of American Poets Prize at The University of Michigan, where he earned an MFA. A recipient of the Ruby Lloyd Apsey Award for playwriting, he has won the William van Wert Award from Hidden River Arts and the Lorian Hemingway Short Fiction Competition for his stories, the Robert Frost Award and the Rita Dove Award for poetry.

His chapbooks, Phantom Limb and Our Parents Dancing, were published by Pudding House Press, and The Whole of Him Collected and About the House by Finishing Line Press. A fifth, In Ordinary Time, is forthcoming from The Moonstone Press.  His poetry and short fiction has appeared widely, in print and online.

He teaches secondary Language Arts and Art History in the greater Detroit area, and can be found online at www.gloselle.com.

With a haunting and contemplative voice, Loselle employs rhythm, word-play, and richness of language line after line. Through rhyme, narrative constructs, and repetition, he crafts poems that are admirably controlled and precise, and reminds us that what William Carlos Williams writes is true: “A poem is a… machine made out of words.” Loselle’s beautifully spun poems continue to reverberate long after the last light’s been switched off.

—Janée J. Baugher, author of The Body’s Physics and Coördinates of Yes

Gregory Loselle’s poems offer memory illuminated by a remarkable astuteness and strong craft. In his hand, the quotidian becomes extraordinary, uncommon, and wonderful. The poet investigates with an unrelenting intelligence and an astonishing clarity.

Be the first to review “The Very Rich Hours” Cancel reply