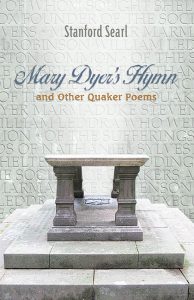 Mary Dyer’s Hymn and other Quaker Poems, constructs poetic songs which open-up multiple dimensions of an embodied sensibility of the conflicts between Puritans and Quakers in 17th century Massachusetts.

“Stanford Searl at his strongest, blending the themes of space, place, and memory, with the theme of Mary Dyer’s martyrdom, part of his faith heritage. This is a collection that for all the Quaker silent prayer is musical and melodic.”

“The compelling narrative contained in this delicate collection leaves me buoyed up and inspired by the joy and certitude to which these early Friends gave witness. I am already in Paradise.”

“Are we willing, like Dyer, Leddra, Stephenson, and Robinson, to face the ultimate sacrifice for a good greater than ourselves? Or are we fated, as poet James Russell Lowell once penned, to see Truth forever on the scaffold, / Wrong forever on the throne? Searl not only asks the important question; he provides inspiring words for those who would learn from history.”