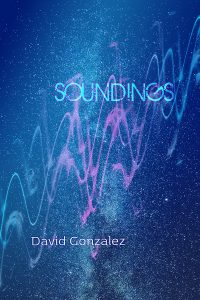 “El Barrio” by David Gonzalez, published in Soundings, released in October 2022, has  been nominated for The Pushcart Prize.

The winged clave,
uprooted, sold-out,
and chained to the miserable hold of a Portuguese slave ship, forced into migration,
this sacred syncopation
mixed with the strains of Andalusian canto
in the sugarcane fields of El Caribe,
and landed at this spot,
this town,
this Nueva York,
El Barrio,
El Barrio, el fingertip grip onto the American dream,
where half the streets open wide to the horizon,
and the other half are dead ends,
y donde el ritmo no tiene fin,
and the groove is deep.

El Barrio, where milk is not milk—but leche,
where manteca is manteca,
where the plantains are maduros,
ripe, sweet, brown smiles.

El Barrio, where the WhatsApp call,
la llamada a tu pueblo is fricken free,
Grandmother’s voice is honey
and you need it to be.

Listen, Abuela, in Puerto Rico, Cuba, Santo Domingo, Mexico y Honduras,
los muchachos eh—speak English at school,
pero español en la casa,
el lenguaje de nuestra sangre—our blood tongue at home,
and each morning I recite for them your prayer, Abuela;
que Dios te cubre con su santo bendición,
may God surround you with his sanctified blessing,
and then they cross themselves and go outside,
and cross themselves again when they pass the storefront churches
where the Charismatic Pentecostals are raising the roof,
and once again at the corner of 176th and Amsterdam,
where gladiolas, lilies, and everlasting silk rose blossoms
mark the spot where Papo was shot,
his lifespan “June 14th, 2000 – June 2nd, 2018, R.I.P.”
spray-painted onto the tenement bricks,
and scrawled beneath the sad youthful eyes of Jesus on a plastic gold crucifix are the words
“Why do the good die young?”

I’m gonna move to Puerto Rico when I retire,
I’ll get a house near the beach
and eat mangoes all day,
but, hey, then my kid’ll probably go to college (que Dios le bendiga) in Ohio,
marry a sweet, smart girl from there,
y entonces los nietos…the grandkids will need me
and I’ll need them to know where they come from,
who we are,
and how we live,
so I’ll stay here in El Barrio,
life is that way,
life is that way,
moving and changing like the crackle and burst of Tito’s timbales,
moving and changing
in El Barrio.