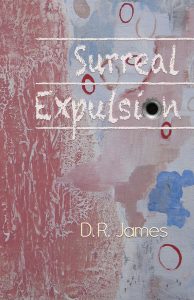 “Surreal Expulsion” by D.R. James, the title poem from his chapbook, Surreal Expulsion, released in March, 2019 by The Poetry Box, has  been nominated for The Pushcart Prize.

—for Marjory Stoneman Douglas High School
Fourteen chairs loiter, emptied, no young bodies
adjusting for the next lesson, hand-raising,
class-clown antic, contemplative talk, pat show
of teen contempt, rhythm beaten with pencil, palm,
bouncing knee, jouncing heal, wise-crack, step
in the impossible problem never to be solved.
Instead, more of the same news, the same vows
taxiing the hellish hallways of feigned intention
but never taking off—the same dazed moments
of the dead. Perhaps their freed spirits now see
through the coal-black tunnel of some eternity
right into the next school’s beehive of victims.
Perhaps they still shadow their three steady mentors
who stood staunch ground in the slow-motion flow
of high-speed ammo. The clip of names shoots holes
clean through law’s callous gut—

whose roll call
claims only an absurd third of a minute, while
their totaled lives witnessed nearly 5 thousand
wheels of the moon through some 75 trillion miles.
But unlike the pull of that implacable moon,
the glib fever of ‘prayers and condolences’ can’t
turn the tide of memory’s radiating its fixed
fissures scored by shards of glass and bone.
Here, we’re left to settle the moonscape of Too Late
for those whose expelled footsteps befuddle us.
And lauding immortality soothes no better. We
know we relax at our children’s peril, run rash risk
of shoring up the open/closed-carry-frenzied fight,
take false hope in the bundles of white-washed bills.
Anthony Borges took five bullets to shield twenty
surviving friends, sacrificed his soccer stardom
because somehow, he knew what he had to do.
His lacerated back and shattered femur scream
in a language we now must teach across America.