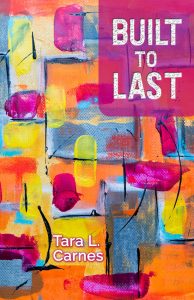 In Built to Last, Tara L. Carnes weaves the voices of survivors into poems to take a fearless look at domestic violence and the support systems that make it possible to heal from the trauma.

“In language as precise as it is restrained, Tara Carnes’ Built to Last is a testament to Carl Jung’s theory of the individuation process—that process each of us must move through in order to become the human beings we were intended to become. Carnes shines a vivid light on scenes of shame, despair, abuse, and terror and on scenes of courageous attempts to help others who have experienced the same. Despite the physical and emotional traumas these poems explore, Carnes shares with us those moments when she has finally taken ownership of her power, enjoying unabashedly her comeuppance. Always, though, at the core of this trilogy of suffering and survival, there is a deep reverence for those both Divine and earthly who have journeyed with her in the darkness/ sharing [their] wisdom and faith.”