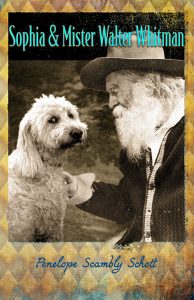 Penelope’s goldendoodle, Sophia is quite the free spirit—so much so that she reminds the poet of Walt Whitman. In this jeu d’esprit, consisting of 30 poems, we enjoy a delightful peek inside the mind of a dog through her often entertaining & insightful “conversations” and adopted philosophies of her favorite poet (after her poet-owner, of course).

Penelope Scambly Schott’s playful poetry collection, Sophia and Mister Walter Whitman, is a delight, especially for admirers of both our companionable canine citizens and Whitman’s poetry. Poems expressed in the voice of Schott’s goldendoodle, Sophia, draw us into the illusion that somehow Sophia is not only well-versed in Whitman, but she has also adapted many of his views to her own world. Sophia’s dog world is one of joy but, perhaps unlike Whitman, she occasionally experiences guilt or self-doubt, as when she suspects there was once another beloved dog before her time, or when she gives in to her worst instincts by attacking a neighbor’s chickens. In the search for her better self, Sophia adapts some of Whitman’s lines and views. One of the pleasures of these poems is recognizing the actual words of Whitman re-purposed here to Sophia’s doggy world view.

—Barbara Drake, author of The Road to Lilac Hill