“Generously candid and open-hearted, this book gives us its bracing gift: full spectrum marital truths that are as irresistible as the cream in the center of the bon bon.”

My Husband’s Eyebrows is a humorous examination and honest celebration of Grabel’s long marriage—its good, its bad, its ugly—told through a collection of prose poems and poetry, punctuated by the author’s richly colored, exuberant, exaggerated illustrations. 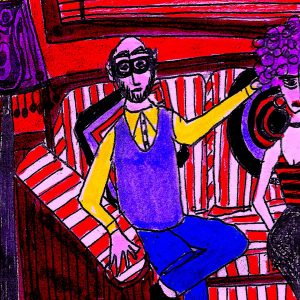 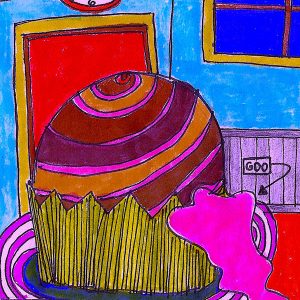 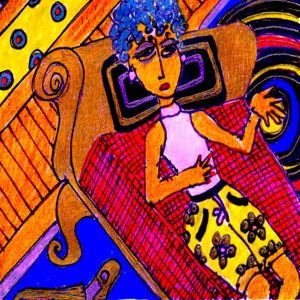 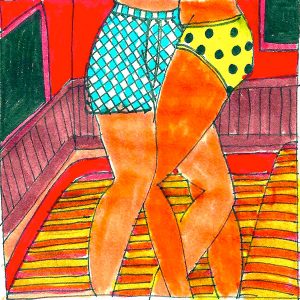 ENJOY A VIDEO OF LEANNE READING FROM THE BOOK: 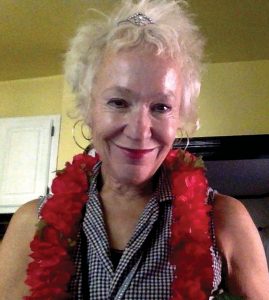 Leanne Grabel is a writer, illustrator, and performer in love with mixing genres. Her first collaboration was with a bongo player and sax player in the mid-70s and her most recent collaborations were with filmmaker Penny Allen and dancer/choreographer Gregg Bielemeier. She has written & produced numerous multi-media shows, including “The Lighter Side of Chronic Depression” and “Anger: The Musical.” Grabel’s graphic novel, Brontosaurus Illustrated, recently serialized in The Opiate, was published by The Opiate Books in 2022. Grabel is the 2020 recipient of the Bread & Roses Award for contributions to women’s literature in the Pacific Northwest. She and her husband started and ran Cafe Lena, a poetry hub and restaurant, throughout the 90s. Grabel is a retired special education teacher, the mother of two daughters and the grandmother of two nubbins, Ophelia and Elliot.

Early Praise for My Husband’s Eyebrows:

Maintaining that “opposition is the lifeblood,” Leanne Grabel takes us on a savvy, sassy, biting history of her thirty-eight-year marriage. She may—as she asserts at one point—always regret each snappish remark, each of her self-described crocodile bites. But we don’t. We welcome the rub, the friction, the sparks emanating from this artist’s poems and vivid illustrations. What verve! Generously candid and open-hearted, this book gives us its bracing gift: “full spectrum” marital truths that are as irresistible as “the cream in the center of the bon bon.”

Anyone familiar with Leanne Grabel’s writing or her graphic and performing art will recognize the quick and, at times, acid wit, her dance with impulse and anxiety and a demanding sense of independence. What readers of this prose poetical chronicle of her marriage My Husband’s Eyebrows will find new is how the long trace of time in that marriage imprints a newfound ability to reflect on that past, a broadening sense of trust and even a patience that early in the text she says does not feel capable. Patience, Dante’s highest virtue, makes for a beautiful and transformative honesty, a song of acceptance and appreciation: “I thought I’d never see It again/ I mean him in the glint of/ my hunger . . .”

Leanne Grabel bursts out of her box in My Husband’s Eyebrows, an illustrated chapbook that is a witty, gritty, sometimes hilarious, and always honest examination of her marriage and stages of her life and growth. In language and images that are as exuberant and colorful as fireworks on Independence Day, Leanne shines a new light on her marriage, from the first honeyed sexual encounters to the time, 38 years later, when “My husband and I sit on our brown leather couch like couch pillows. We could probably feed the hungry of a small nation with all the crumbs beneath the cushions.”

Leanne opens the book with a Charles Bukowski quote and the lines: “I feel an epiphany coming on.” This epiphany is not accompanied by choirs of angels but by the noise of a vacuum as she turns over the couch cushions and cleans out the metaphorical basement: “There are mold spores from the late 19th century down there. They’re so old they could be valuable. Or deadly. I’m just happy to see them dying in the new light.”  In honestly confronting her own anxiety, selfishness, fears, and desires, in probing what in her long marriage is liberating and what is left over from family trauma and from the 19th century, Leanne throws open the marital curtains to let a new light in.

If you want to know what life feels like when someone’s being honest and funny and insightful and daring—and I mean beyond what you might imagine to be daring and brave and real—here’s your book with words and explosively jazzy a-ha moment drawings to match. And if you don’t want to experience honesty and reality, all the more reason to read the words and dive into the pictures, because this book will open your heart, your mind, and your emotions in ways that you might not expect. Leanne Grabel writes that “candy is absolutely necessary.” I would add, this book is absolutely necessary.

Witty. Fun. Honest. Deeply loving. Unforgivable. Over the top. TMI. Delightful. Did I say loving? Plus, those wild illustrations.

—Penelope Scambly Schott, author of A is for Anne, Crow Mercies, The Perfect Mother, Sophia & Mister Walter Whitman, and more

Leanne Grabel’s insights, her wry, bright lines and her luscious, hilarious, moody drawings are emotionally resonant, scorchingly honest, and highly entertaining. Grabel pulls back the curtains on marriage—the real and the complex. My Husband’s Eyebrows, should be handed to each and every couple as ink dries on their marriage licenses. After the honeymoon, they can refer to this treatise on marriage as a long game, contemplate the gravity of time, and learn about the grit, both coarse and fine, of doubt. Someday, they’ll thank her. I thank her, right now, for this illustrated chapbook where text and visuals complement and illuminate each other, like well-seasoned couples.

—Suzanne Sigafoos, author of This Swarm of Light

Supposedly there are 36 Questions that when shared between two people seeking intimacy, will lead to love. The 22 poems that comprise My Husband’s Eyebrows outline what it’s like to sustain that love—a love that begins with bathing in warmed honey—golden, thick, and sweet and climbs a rock-hard wall of realization that after 38 years, both of you have become absent listeners whose ears sometimes decide to just get up and go inside.

But, Oh, Sweet Reader, do not despair! No! No! Grabel’s tale is a vacation from any familiar version of marital woe. It’s a terrifically true story, spoken in words and graphic illustrations over breakfast with white-faced monkeys fanning sugar packets like paper dentures and brimming with observations of electrified eyebrows and thighs, generosity, depression, and shake the rafters loose lust.

Go grab yourself a cocktail, a joint, a warm cup of chai with extra honey, plump up that comfy pillow and start reading. Now.

My husband is a master of mimicry. He can imitate any sound that he hears. He can do double sounds, triple sounds. He layers accents, animals, machinery, technology. One day we were walking along the river and he mimicked a Polish Jew with a missing tooth selling hotdogs at a Yankees game. Then over coffee, he mimicked a Frenchman with a lisp, a jaw click and a Chinese accent. I laughed so hard, I felt three. Last month he mimicked radio static. Masterfully. It was exact. Hilarious.

“It’s our new song,” I said. And we laughed and laughed.

I am grateful for my husband’s talents. He could probably mimic the sound of gratitude. But what is it? A sibilant whoosh? A muffled whoopee behind a handkerchief? Mimicry is no talent of mine. My lips are slow-moving (the only part of me that is). And I often don’t listen well, as if my ears just get up and go inside.

But when my husband mimics perfectly and we laugh like that, like we’re three or eleven or even forty, that’s the cream in the center of the bon bon. And candy is absolutely necessary.

Be the first to review “My Husband’s Eyebrows” Cancel reply