Hello, Darling explores the relationship of a mother with her daughter struggling with mental health. Christine Higgins shares both the joy and the complexity of childrearing, while paying tribute to an exuberant and creative child. Motherhood doesn’t end, but it does change when the daughter dies at the age of seventeen. These poems explore the grief of both parents and what it takes to heal from within that grief.  In Hello, Darling, Higgins gives voice to sorrow while holding fast to the love that is essential. 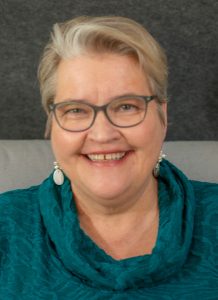 Christine (Mullin) Higgins was born in Staten Island, New York.  She has been writing poetry since the 3rd grade when Sr. Thomas created a writers’ club that met before the school day began. A graduate of Marymount Manhattan College, she moved to Baltimore to attend The Writing Seminars of The John Hopkins University.  For ten years, she taught writing at Loyola University, and also for the Masters in Writing Program at The Johns Hopkins University in Washington, D.C.

A series of personal events led later in life to a rewarding career, including research, where she has focused on substance use disorders and mental health. Her work has appeared widely in numerous print and on-line journals.  She is the author of two chapbooks, co-author of In the Margins: a Conversation in Poetry (Cherry Grove Collections, 2017), and Plum Point Folio, a collection of her poems and her husband’s photographs.  Her awards include a residency at the McDowell Colony, and Individual Artist Awards from the Maryland State Arts Council in Poetry and Non-Fiction.  She is currently at work on a memoir about grief.

Christine Higgins is a poet and a mother who is examining, hunting, searching for meaning in the death of her and her husband’s only child, Emily, who was also a gifted poet searching for life’s meaning. Go as far back in human history as it is recorded and you’ll find mankind, poets in particular, dealing with the grief, sorrow, and pain of life.

This collection of poems clearly defines Emily and the loss her death brought. The donation of their daughter’s heart is powerfully described in “The Boy.” My favorite poem is “Love Child” which is about her parents after Emily’s death and a trip to Key West. It speaks to the truth William Faulkner spoke to all writers. Be the last voice on the barren rock in the last sunset still speaking we were put here, not to survive but to prevail. Christine Higgins has, as we Lakota say, written a Death Song that acknowledges when sung, we are always present. This is poetry at its purest and best. I wish I could send a copy to every mother whose son I taught who has his name carved on The Wall of black granite. Then they would know the spirit lives long after we’ve left the earth.

Hello, Darling. In the title poem of this carefully arranged chapbook, Christine Higgins greets her newborn daughter immediately after giving birth. But too quickly the daughter is being whisked away by the nurse, and so the very word hello—such a plain and common American word—is already beautiful with poetic power. The poems that follow in this small but stunning collection are narrative in that they tell the story of a mother’s love that must endure—and survive—a painful letting go. But these poems also rise, as good poems do, up and out of the personal narrative. An accomplished poet, Christine Higgins lets go of her beloved daughter in a way that, as grieving mother, she surely must have thought impossible. To the world then, especially to those who think it impossible, she offers these poems. They sing Hello—that ordinary word of greeting, of recognition—to the beloved. Even in the face of death they sing. And they keep singing, the connection ever strong.

I read Hello, Darling with my whole heart and soul. Poet Christine Higgins is a mother who suffers the unimaginable grief of losing her daughter. In poem after poem, in myriad forms, she composes a song that has everything in it—her daughter’s birth, her life, and her life after…. I read it again and again because I wanted to be beside these poems, to feel their tenderness, their hope, and their deep love.

Be the first to review “Hello, Darling” Cancel reply