Mouth Quill’s twenty-one poems narrate an intimate journey of universal themes—of ancestors, displacement, migration, longing, and connection. Drawn from the author’s childhood familiarity with ancient poems of her heritage, the collection’s title, “mouth quill,”  is inspired by Finno-Ugric runic verse and refers to the “singer’s magical tool.” The work unearths many such poetic concepts, creating organic metaphoric connections from the distant past to present; occasionally, the reader is invited into magical realism: becoming “the spirit of an egg, carried by the sea to Iberia” before plummeting below the Baltic Ice Lake to find the “land mother will call home.” Other poems display tragedies of history (war and displacement) and the effect of ancient world views—cataclysms, music and sacred nature—upon the author’s childhood and present in the 21st century, completing a tightly knit, lyrical arc of identity. 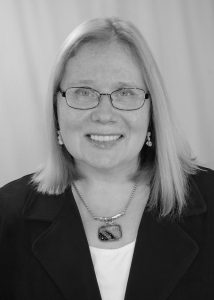 Kaja Weeks is a poet, essayist and classically trained singer whose writing contemplates music and healing as well as identity through multiple generations. She is the American born daughter of World War Two refugees from Estonia, a northern land on the Baltic Sea. Moved by the pain and beauty of its history, she also loves the alliterative sounds, mythic lore and world views in that ancient Finno-Ugric culture. Many of these motifs, found in thousands of runic verses and long preserved by oral transmission, come alive in Kaja’s creative work. Her poems, especially, weave new strands with timeless, universal themes of ancestors, displacement, migration, longing, and one’s sense of self and other.

Kaja was named a “little songbird” by the time she was five, singing hundreds of Estonian and English songs. Now she is also a clinic-based music educator in Maryland who engages young children with autism to their earliest communications with playful singing. Her ideas on development and early communicative musicality have been represented in trainings, lectures, keynote addresses and in scholarly journals in the United States and Canada.

Kaja is a graduate of New Directions, a three-year writing program of the Washington Baltimore Center for Psychoanalysis, where she studied with renowned writers in all genres as well as specialists in depth psychology. Kaja’s literary writing has appeared in The Sugar House Review; Ars Medica: A Journal of Medicine, The Arts and Humanities; Under the Gum Tree; The Sandy River Review; The Potomac Review (nominee, Pushcart Prize) and elsewhere.

“I am a refugee’s child . . . I long for the resting sigh she was ripped from . . .” writes Kaja Weeks in her poem “Coastal Meadows” from her collection, Mouth Quill: Poems with Ancestral Roots. Weeks’s exploration of her Estonian heritage in twenty-one riveting poems swept me with her back to “those runic tunes of lost silver beads,” then forward to her mother’s escape as one of “a motley crew of the dispossessed/stitched into a patchwork of America.” Rich with birds and melody, these pages sing, but her incredible “The Dolomite Heel Print” makes sure we understand not all songs are merry. Mouth Quill, a dark crystal studded with light, amazes.

Estonian runic verse inspires second-generation American poet Kaja Weeks’ vivid lyric poems, beginning with the title, which refers to “the singer’s magical tool,” and aptly describes this poet’s “quill” as well, delighting with wonderfully musical and evocative language: “Mother, I see no crossroad, no rock mossed/with softest threads, no signs of sacred space.”
We travel back in time to her parents’ escape from a “world gone mad with war once more,” to forging a diasporic post-WWII life, to her late mother’s hospitalization, “Wailing not at gods, but from some crucible of the gods,” to the poet’s more recent adventures visiting her parents’ homeland. Weeks’ consideration of identity through the lens of history is visceral and heartfelt; and the inclusion of Estonian language and culture deft; as is the haunting intertwining of world history and family history; and the subject of immigration remains topical as ever, in the home of the Statue of Liberty.

Equally inspired by the traumatic geo-political history of Estonia, her ancestral land, and by the alliterative musicality of the Estonian language, Kaja Weeks has woven the archetypal story of conquered nations and displaced persons into a series of lyric poems that resonate with historical importance and quiver with delicate beauty. In poem after poem, Weeks uncovers the mythic imprint of an ancient, unvanquished culture that has retained a strong sense of itself and nurtured its citizens through longstanding traditions of folk song and choral singing. Like the Estonian ancestors who came before her, Weeks sings both to celebrate and resist. “I can’t escape this terrible beauty,” she writes. “Blooming with songs/ and memory, I go.”

—Kate Daniels, author of In the Months of My Son’s Recovery and The Niobe Poems

Mouth Quill: Poems with Ancestral Roots is a touching, gorgeously written collection—such patient, meditative themes, such lushly imagined writing. “The Dolomite Heel Print,” in particular, is a breathtaking exploration of history and life and identity … a stunning piece! The collection feels like a deep dive into identity—what binds us, what tears us apart, the ways that family can become home.

In Mouth Quill, a remarkably evocative collection of poems, Kaja Weeks celebrates Finno-Ugric traditions of lyricism and the reverence of nature. The ancient runic roots of these traditions rarely get the attention that they deserve, and they are well-served here. It is a pleasure to read the poems aloud, feeling the rhythms with which they are instilled. The poems are both intensely personal and resonate with a universal voice.

Ancestral Journey—Beneath Ice Sheets, the first poem of the first section, also titled Beneath Ice Sheets starts “My ancestors migrated forward in time, but I migrate backward,” and to my mind this is a key to all twenty-one poems. Weeks integrates standing in the present and looking to a past that has been handed down to her— not just reporting on what she’s been told, but having experienced the stories for herself, takes us with her.

Salme-in-Silk, in the third section, Helix, dedicated to the author’s mother, struck a particular chord with me, because I had the honor of knowing Salme in the Estonian-American community, and she was an extraordinary woman. But reading the poem, written in a mystical and lyric voice, it transcends the personal and delivers a rich visceral experience. I hope these poems are read by many and enjoyed by all who do.

Using her quill to comprehend, imagine, burst free and sing, the poems of Kaja Weeks in Mouth Quill are a testament to the splendor and endurance of the human spirit. Out of the howls of war, out of curses, murmurs of stricken mothers, and cries of an ancient, trampled landscape has come a poet of such capacity that one is left gasping. From ancient runes and primeval mud of Estonia, she swallows the unendurable and transforms it into the harp song of her ancestresses. From ancestors who “lived beneath Arctic light/ where night-green and violet-blues quivered,” Weeks tells us her foremothers “cradled harps of northern spruce.” If they could hear the music of their daughter, they would weep. Read these poems and sail on sung waves of “murmur and hum.” It is an honor to hold these majestic verses in one’s hands.

Kaja Weeks — A Featured of The Poetry Box LIVE – October 2020

Instantly, I am home.
I have never been here, but this place
settles me—the grassland cradling,
as if singing and rocking an infant to sleep.

Who slipped this place in me?
Was it my choosing, or has it crept unknown?
When did it come to quicken my breath
and then supply a resting sigh?

I am a refugee’s child—
daughter of a true native daughter
of southwestern Estonia—who grew
with her mother’s hollow in her heart.

I long for the resting sigh she was ripped from,
for the sway of reed plumes on her seaward creek.
Her stories, a mirage of sounds, and my yearning—
gild sight, bending time and space.